Over 200M ounces of gold has been extracted from the Abitibi Greenstone Belt. Goliath’s Nelligan Project (East and West Claim Blocks) is predicated on the easterly and westerly extensions of the prospective gold-bearing Guercheville Deformation Zone and its subsidiary faults (the “Break”) located at the south end of the Chapais-Chibougamau Mining Camp (the “Camp”) (Figure 1). The Break hosts a number of gold deposits and occurrences as well as one past producing mine.

The Camp hosts east-west trending mafic volcanics or basalts, felsic volcanics or pyroclastics and volcaniclastics, sedimentary rocks and major intrusive complexes, all intruded by gabbro sills and dykes. The sedimentary rocks and gabbros hosts the Nelligan-style of mineralization (the “Nelligan Trend”). Major faults intersect all rock types and consists of four (4) groups based on their direction: east-west, southeast, northeast and north-northeast trending faults. The east-west and northeast-southwest trending Break cuts the Nelligan Project (Figure 2). The Break is similar to the Larder-Cadillac and Destor-Porcupine Deformation Zone where most of the gold mineralization occurs in the southern portion of the Abitibi Greenstone Belt. The Break reaches up to 1 km wide and is characterized by shearing and carbonate-sericite-rich alteration. 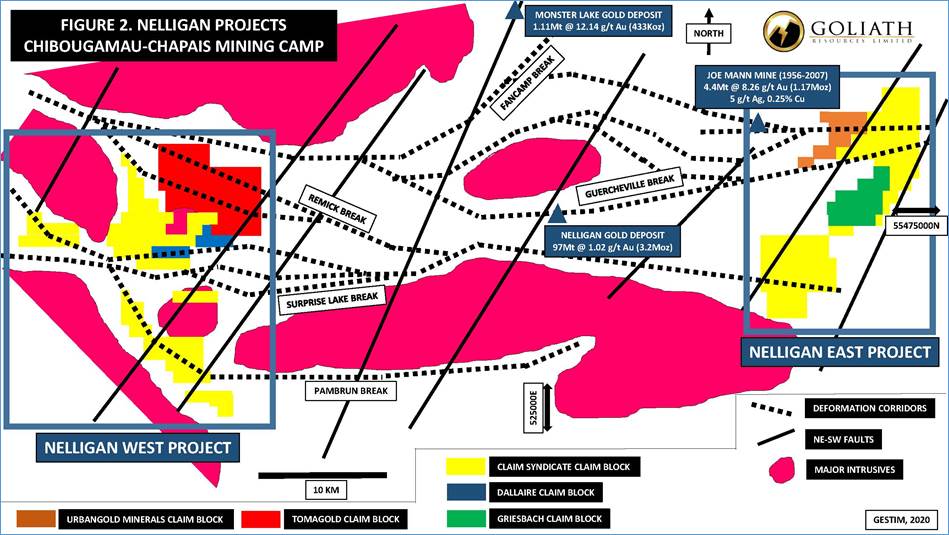 The Nelligan West Claim Block is located at the western end of the Nelligan Trend, some 30km from the Nelligan Gold Deposit. The Nelligan Deposit hosts Inferred Mineral Resources of 97.0 million tonnes grading 1.02 g/t Au (for 3.2 million ounces of gold) (IAMGOLD, 2019). At the Nelligan Gold Deposit, gold occurs in a series of subparallel alteration zones, up to 200m wide consisting of silica, iron carbonate, potassium and sodium feldspars, iron oxide as hematite, and up to 30% pyrite as disseminations and semi-massive lenses with minor chalcopyrite. Visible gold is rare and it is found in association with quartz-carbonate veinlets or between pyrite grains. The gold mineralization at the Joe Mann Mine is hosted in sulphide bearing quartz veins, and has been mined to a vertical depth of -1,200m along a 2km strike length.

Goliath expects to start its Stage 1 program in Q3-2020, and will include a digital compilation and synthesis of all the historic work on the Nelligan Project and field reconnaissance work and prospecting (rock sampling, outcrop stripping, channel sampling assaying, reporting); whereas the Stage 2 program could be carried out as early as Q4-2020 on any new gold targets generated and may include reconnaissance diamond drilling (5,000 meters). The TomaGold property (“TomaGold”) of the Nelligan West Claim Block is the only one under option; it has not received any previous exploration work; and it is located directly on the western extension of the Nelligan Deposit. TomaGold will be the initial focus of the 30-day Stage 1 field prospecting program.